Like the entire North Caucasus, the Kabardino-Balkarian Republic is located in the southern part of the temperate climatic belt. By combining heat and moisture, it is located in two climatic regions: the Ciscaucasia and the High Caucasus.

Located in relatively low southern latitudes (between 42051 'and 44 001' northern latitude), the territory of the republic receives significant amounts of solar radiation, which determines the abundance of sunlight and heat. The maximum sums of radiation come in May-July at the highest altitudes of the sun and the duration of the day.

Located on the border of the temperate and subtropical climatic zones, the Caucasus mountains are an important climatic region. The territory of Kabardino-Balkarian Republic, fenced off from the south and southwest by the mountains of the Greater Caucasus, is open from the north and north-west for a free invasion of cold air masses from the Arctic. The relief also has a great influence on the distribution of precipitation, increasing their loss when entering the territory of the country's moist air masses.

The mountainous relief causes high-altitude zoning of the climate, which is especially pronounced in the highland region of the Central Caucasus. A change in the air circulation in the high layers of the atmosphere is superimposed on the overall change in air temperature and humidity with altitude. In the mountains, starting at a height of approximately 2000 m, the leading role belongs to the western air transport.

The vegetation cover to a great extent delays the solar radiation entering the surface of the soil. The amount of radiation trapped by the cover depends on the nature of the vegetation, the height of the plants, the density of the cover, and so on.

The location near the republic of the Black and Caspian Sea can not have a significant impact: their size is insufficient to form its climate. But still the influence of the Black Sea is more tangible than the Caspian Sea. 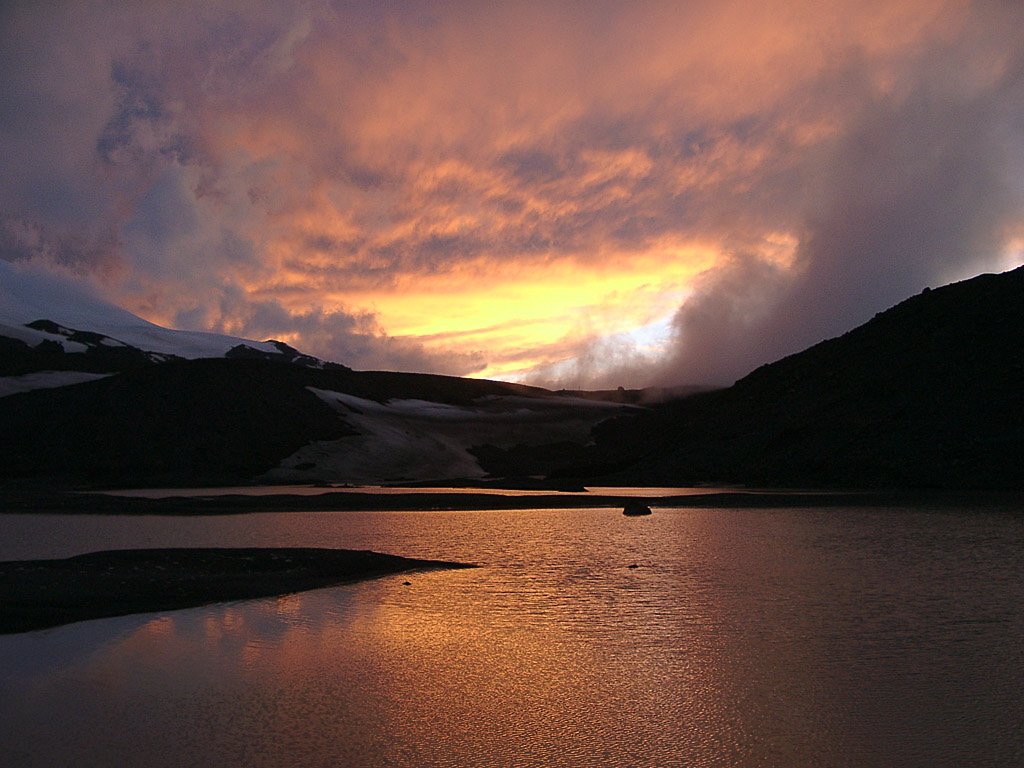 In the territory of Kabardino-Balkarian Republic, according to the conditions of heat supply and humidification conditions, it is possible to distinguish the types of climates: continental (steppe zone, northeastern part); Moderately - continental (foothill part); Alpine (mountain part).

Autumn comes on September 19 (the transition of the average daily temperature through +15 in the direction of decrease). The average date of the first autumn frosts is October 25, the earliest is September 26, the latest is November 24. The average number of days with fog is 24.

Precipitation in the territory of the republic is distributed extremely unevenly: a very small amount falls in the northeast - less than 300 mm, while on the windward slopes in the highlands it falls over 1000 mm. The distribution of precipitation is heavily influenced by the nature of the surface. In the mode of precipitation, the following feature is observed: most of the precipitation falls in the warm season - from April to October, precipitation increases 3-4 times in comparison with the cold period.

Under the conditions of moistening, the territory of Kabardino-Balkarian Republic can be divided into three regions:

Alpine zone. Wet climate with excessive moistening (600-1000mm and more), the humidification coefficient is more than 1.7.

The territory of Kabardino-Balkarian Republic lies at different heights above sea level: the eastern part (plain) lies only at altitudes of 170 to 200 m, and Mount Elbrus has an elevation of 5642 m.

The air pressure with altitude decreases by an average of 10 mm for every 100 m of lift. The average annual atmospheric pressure is 740 mm. - the highest is observed in the east. It decreases as it moves to the west and south-west due to the increase in altitude above sea level and is less than 600 mm. in the high mountains of the Greater Caucasus.